One of the popular awards at the Surf Life Saving Sydney Northern Beach Awards of Excellence was Warriewood SLSC being the Most Improved Club in the Branch.
Under the strong leadership of president Jen Spencer, Warriewood improved eight spots from the previous season to take this year’s top award.

So many good things have happened at Warriewood under her watch.
Jen (second left) is pictured with SNB Branch President Doug Menzies, Zali Steggall OAM and Member for Warringah and Jason Falinski Member for Mackellar at the awards ceremony at Dee Why RSL Club last Friday night. 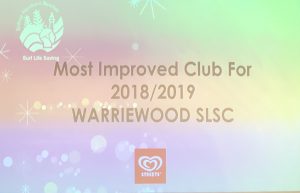 The Cub also received a cheque for $2020 for coming 5th in the Patrol Audits. It was also a big night for the Branch president as he became a Life Member of SNB Branch , along with Bill Sheridan and Geoff Raper.

WSLSC is a Covid-19 Safe Club